Something I have been thinking about for quite a while now but haven’t really acted upon apart from the other week we decided we would dispense with tinned tomatoes as we do use quite a lot and I have concerns about leaching into our food.

Sally’s post on plastics added even more fuel to the fire that has been burning inside me for a while not just health-wise but environmentally.

Bisphenol A (BPA) is found in plastic containers and water bottles, on the inside of food cans and in till receipts.

The chemical, used since the 1960s to make certain types of plastic, mimics the female sex hormone oestrogen and has been linked to low sperm counts and infertility in men, as well as breast and prostate cancer.

Tomatoes first and then bottles…

Tomatoes were easy and so much cheaper than in cans as well…they freeze well and cost wise I am saving over 100% based on my usage. No brainer and quick to do…I just put boiling water over the tomatoes and skinned them. Then I had a thought..yep…I put the skins with a little of the tomato juice in my small blender and viola blended smooth you wouldn’t know they were skins and a lovely bright red colour so I added to the tomato pulp which brightened the colour.

No waste at all… 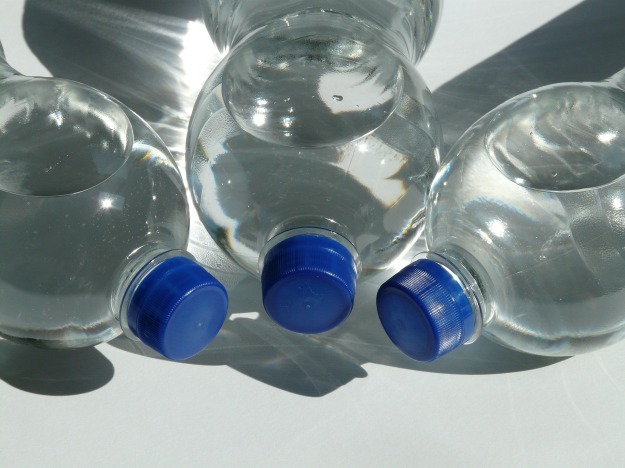 This is where the fun began…Simples? It is not!

So I have simplified it a little for you( and me) I have grouped the numbers into good and bad and given you a little background…my advice do some of your own research as well if you have any concerns about  how plastic may affect your health and your family’s health.

Group One. Are what I class as the baddies and I avoid like the plague.

This is the most commonly used plastic for consumer products which include:- Water bottles, soda bottles and some food packaging.

It is intended for single use only….One time useage…as reusing increases the risk of leaching and bacterial growth. It may leach carcinogens and should NOT be reused.

PVC is known in many circles as poison plastic it contains many toxins which can leach throughout the life of a product.

It should not be re-used .

It may leach styrene which is a possible human carcinogen into food especially a risk when food is microwaved.

Chemicals used in the manufacture are linked to human health  and reproductive system dysfunctions.

Should be avoided where possible.

This is a known endocrine disruptor also this group 7 is a group for anything which doesn’t fit into the other categories.

Found in food containers labelled PC, baby bottles, sippy cups some of which are now labelled non leaching but it is still possible..

THERE IS A NEW GENERATION OF PLASTICS BEING DEVELOPED TO REPLACE POLYCARBS USING POLYMERS LIKE CORN STARCH.

#7 should not be reused and where possible avoid using for children.

Group 2 are better but I always look for alternatives where I can as in glass bottles.

A stiff plastic used for milk containers and detergent containers. toys and some plastic bags.

Considered the safest form of plastic…Reuseable and recyclable.

Considered less toxic( what is that supposed to mean) and relatively safe for use.

This plastic is tough and light and a barrier against moisture, grease and chemicals  it is used as a cereal box liner… the bag your corn flakes are in…used for bottle tops, margarine and yoghurt pots, potato chip bags and straws.

These symbols are generally found around the base or on the bottom of bottles. It is also the number which is found inside the recycable arrows which tells the real story behind your plastic.

I hope this post has been helpful …I have been left with the need to know more as everything I have read is seeming to say maybe and using words which don’t commit…I myself have made a start and will be changing what I can by only buying products which are in plastics which are considered safer and even that rings alarm bells with me as so often reports have been vilified and poo pooed by manufacturers and then a few years later peoples fears have been justified..

It is not just our health and our families but the worlds health, animals and the enviroment even the Queen of England has banned the use of plastic bottles/straws on her estates. I know this is based on helping the enviroment but my families health is also important and I think the two go hand in hand.

30 thoughts on “Plastic are you confused??? The truth is all in that number.”