Since moving from sunny Phuket to Northern Thailand, I am discovering a wealth of cultures. It is both fascinating and makes me in awe of what I am discovering. I am both surprised and delighted to see a lot of the ancient arts such as weaving are still being preserved and passed down through the generations.

Over the next few months, I will be bringing to you other ancient arts which are still being widely practised here in rural Thailand. It is really lovely to see age-old skills being passed down to the young and quite often you will see the very old their daughters and their children all playing their part in keeping these traditions going.

Weaving is one of Northern Thailand’s oldest and precious arts:

The skill which is learnt from a very young age at their mother’s knee.

There are many designs woven into the cloth, flowers, birds, animals, simple geometry and some of the most intricate flowing water designs which are for the very experienced weavers.

The cloth when it is made is fashioned into many things, beautiful bags, traditional Thai wrap around skirts, jackets and wall hangings to name but a few.

The silk-making process from beginning to end:

This video shows a silk village in Thailand and how the silk made from start to finish.

The weavers originally migrated from the Sipsong Panna region in Southern China where the practice of breeding silkworms goes back at least 5,000 years.

In Northern Thailand, they are known as the Lue people.

Devoted Buddhists who live a simple life and always have a ready smile for strangers like me. As you drive around the small country roads you will still see many of the looms underneath the wooden stilted Thai family homes where mum and the old nan still weave beautiful fabric to make a living.

My pictures show one such woman who very kindly allowed us to take pictures of her weaving under her home.

The looms handmade of bamboo wood and once known as the universal loom in Southeast, Asia is now called the Lao hand-loom from North Eastern Thailand the area is also known by locals as Esarn, Isaan or maybe something completely different so many different spellings and no one seems to know the correct one.

As we say TIT( This is Thailand)

Did you know ??? The very famous Lao, Thai Khmer silks were woven on the very same looms for many centuries.

Where does the silk thread come from? 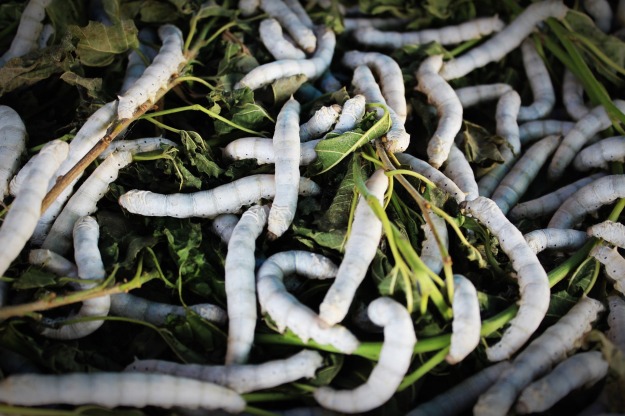 What is the silken thread made from?

It is made from the threads that the larvae of the mulberry silkworm Bombyx mori. The process is known as sericulture the silkworm feeds on white mulberry leaves although they will eat other species of mulberry and have also been known to feed on Osage orange leaves.

Jim Thompson is a name which is synonymous with the production of silk production in Thailand and very highly sought after. On the Jim Thompson Farm in Nakhon Ratchasima, visitors can see the entire silk-making process. However, the farm is only open for a few weeks during the cold season. If you are ever travelling around Northern Thailand then I hope you get the opportunity to see the traditional art of weaving and silk making for yourself.

Grateful for the present moment

Thoughts on challenging power and getting past capitalism

A daily selection of the best content published on WordPress, collected for you by humans who love to read.

Blog about our adventures as world travelers and expats living in Colombia.