It is the subject of many news desks, question time, documentary’s, in fact, it is on the news it comes up on your FB news feed, magazines, newspapers..everyone is talking about plastic… 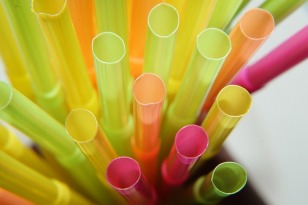 Plastic is a major problem worldwide…International environmental movements are working overtime on publicising the fact or coming up with answers…States and local councils are trying to play their part by banning single-use plastic bags, straws and drink containers.

Fact: Between 4.7 and 12.9 million metric tons of plastic is floating around in the oceans…

Fact: The equivalent of one garbage truck per minute being emptied in the ocean.

A study conducted by the Santa  Barbara Marine Conservancy found that of all ocean waste only 1 % of surface waste  i.e garbage patches which we have seen photos of floating on the seas or what is washed up on the shorelines  contained drink cups, straws, cigarettes one of the biggest contributors of sea waste is fishing equipment and nets although there have been no conclusive long term studies…

The oceans and seas are so vast that unless there are studies which encompass all the seas and rivers which would be a mammoth of a task and would be nigh on impossible.

A 2017 study found that 79,000 metric tons of plastic are floating in the Great Pacific Garbage Patch.

There is no mention of plastic reduction policies and Japan and America did not sign the charter. In the case of fishing gear, there are no worldwide rules.

It seems to me that no one country wants to be the one which goes far enough and makes a difference…more effort has been made by environmental and non-profit organisations.

One such organisation Net-Works was co-founded by the Zoological Society of London (ZSL) and Interface Inc.

What can replace plastics?

The answer can be a difficult one as plastic is very versatile and I have heard McDonald’s are getting flack because they are replacing or have replaced plastic straws with paper straws.

Last June, the US fast-food chain announced it would end the use of plastic straws in all 1,361 branches across the UK after nearly half a million people called for the company to make the change. The company began phasing out plastic straws last September, with the process to be completed sometime this year.

However, the move has angered customers, with several now taking to Twitter to complain the paper straws are ruining their drinks, specifically milkshakes.

One customer tweeted: “With the paper straws they are fine for a coke but the other day I had a milkshake and I struggled so so much that I ended up getting one of my own plastic straws at home.”

They obviously were not one of the half a million people who called for the company to make a change…when they are still using plastic straws in their own home…Just saying!

Maybe McDonald’s should offer a choice and reduce the price of a meal by 20p if paper straws are used and increase the cost by 20p if a plastic straw is used.

Bioplastics...Are one popular area of research as cellulose is the starting compound instead of petroleum. PLA is a corn-based plastic substitute which means it is bio-degradable.

A study by the UK Environmental Agency found cotton tote bags must be used over 300 times to be as sustainable as a plastic bag, given the increase n costs to make them.

Recycling…How can we improve recycling?

Recycling facilities melt plastic down, turn it into pellets that are sold and repurposed…That sounds simple, doesn’t it?

But what about the plastic which is not biodegradable? It ends up in landfill or the ocean for centuries…

Research carried out by the University of California at Santa Barbara discovered only 9% of all plastic produced has been recycled…Many reasons account for this as many people don’t recycle properly and just stick in the closest bin, it may be too dirty I always wash my containers before they are put in the bin and because of the little symbols which I mentioned in a previous post all plastic cannot go into the same bin it needs to be sorted…

It actually takes a lot of time, energy and fuel to recycle plastic and cost-benefit analysis has found that recycling plastic might not be worth the resources it takes…Many environmental groups largely agree that recycling should be a last resort until more effective and efficient waste management is enforced…

So what is the answer?

How to encourage people to take greater responsibility for the action around environmental crises.

Nick Nash is a fellow in the social and environmental psychology department at the University of Cardiff. He specifically focuses on how pro-environmental behaviour can be encouraged, especially when the environment may not be people’s biggest concern.

In other words, making environmentalism a social norm is one of the best ways to get people to be more aware of their behaviour. Using the plastic straw ban as an example, he explained, “if everybody else in the restaurant is using them, and the context condones their use (e.g. straws on tables or put into drinks when served), then this increases the likelihood that an individual will act in accordance.”

He explained ways to increase the odds of a practice becoming a social norm; for example, getting people to make explicit commitments, getting celebrities or well-liked people to publicize their own actions, and raising awareness about easy-to-follow behaviours.

There are definitely many incentives and much going on but we clearly have a long, long way to go or more and more plastic will end up in the oceans of the world.

What do you think?

Exciting for me hence the title of my blog, Retired No One Told Me! I am having a wonderful ride and don’t want to get off, so if you wish to follow me on my adventures, then I bid you welcome! I hope you enjoy the ride also and if it encourages you to take a step into the unknown or untried, you know you want to…….Then, I will be happy!

Carol is a contributor to the Phuket Island Writers Anthology: https://www.amazon.com/Phuket-Island-Writers-Anthology-Stories-ebook/dp/B00RU5IYNS

MeWe is a new social media and one which many of us are turning to mainly migrating over to as FB has banned many of my friends and for what seems no good reason that we can see I hope you will join us there.

10 thoughts on “Plastic…Part 7…How does plastic get into the Sea?”

Making Clear What Is Hidden In Plain Sight