Khao Rang Hill is one of Phuket’s most famous viewpoints. Located to the northwest of the city centre, it offers views out over the town, to the south of the island, neighbouring islands and along the hills.

Called Monkey Hill locally and if you want to see monkeys then this is one of the places to visit….. It also boasts a nicely landscaped park with children’s playground, three restaurants of which this one is our favourite..the food is lovely… Quite spicy so if you don’t like it Thai hot ask for Mai Ped( not hot) there is also a panoramic terrace.

To access Rang Hill you can take one of two main roads leading up, one from Yaowarat Road by Vachira Hospital and the other from the east-west connecting Mae Luan Road. The access road is a steep one.

Phuket Town is a charming mixture of old and new…lovely Sino Portuguese buildings and all the overhead electric cables are now underground a very pretty town..

If you are up and about bright and early then you will see monks take to the streets on their daily alms rounds and the fresh market buzzes with restaurant owners buying ingredients for the day’s meals.

Time to explore..here are a few pictures of some of what we saw… A cute tuk-tuk..

Phuket was once a busy, bustling Tin mining town and the Museum is a good place to read about the history.

Time for lunch at one of my favourite restaurants…The China Inn in Thalang Road which is also a dressmakers dream for materials etc. But I digress…..Food!

The Old Town and every time I go I find something I haven’t discovered before. This lovely little shrine is down a side street on Phang Nga Road built among the houses and there it is like a little jewel in a crown. Often missed it now has a lovely ornate streetside archway.

It was built in 1891 by Luang Amnat Nararak (Dan Duad) in order to house Chinese deities which his family had previously respected. This shrine is used not only for worshipping all the sanctity but also for gathering his family.

Constructed in Phuket over a hundred years ago. Its name varies, depending on the languages; for example, in Hokkien Chinese, it is called “Teng Kong Tong Shrine” or “Sing Jia Kong Shrine,” while the local people call it “Am Teng Kong Tong.”

Sang Tham Shrine is so distinctive that tourists are attracted to visit. The location is very peaceful. Even though the shrine is located in the centre of Phuket, it is not affected by the city’s chaos. Furthermore, this shrine is no less spectacular than any other shrines. The architectures in the shrine were designed in cultural and traditional Chinese style. It is obvious that the building is similar to the small house with a Chinese style roof. The roof is made of stucco in the shape of dragons and Chinese dolls, which is a popular well-decorated art style in Hokkien Province. As for the shrine itself, there are paintings of black lined pattern inside the squares on two sides of the wall, depicting the legend of “Xue Rengui” in Tang Dynasty, when Ong Sun Tai Sai deity was born human.

In addition, in 1997, Sang Tham Shrine was granted the Conservation Award by Princess Maha Chakri Sirindhorn, after the selection by the Association of Siamese Architects under Royal Patronage (ASA). In 1999, there was a big renovation for the shrine’s 109th anniversary in 2000.

It is a lovely mix of both old and new. Some of which is now housed behind glass to preserve their beauty. 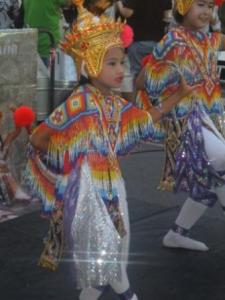 A pretty town with lots to see and do which I hope you will enjoy if you visit Phuket.

Sporadic randomness from a disheveled mind.