The first cakes were more bread-like and sweetened with honey, nuts and fruit were also added…history tells us that the Ancient Egyptians had quite advanced cake making skills.

The Oxford English Dictionary traces the English word cake back to the 13th century. It is a derivation of ‘kaka’, an Old Norse word. Medieval European bakers often made fruitcakes and gingerbread. These foods could last for many months.

A recipe from 2000 years ago had pomegranate seeds, pine nuts and raisins mixed into a cake made out of barley mash. Later in the Middle Ages, fruitcakes with honey, preserved fruit and spices were popular.

Fruitcake made with butter and sugar was banned for a while in Europe in the 18th century because it was thought to be just too rich and tasty….sinful it was said…From the 19th century on fruitcake became a traditional wedding cake in England.

Mash ingredients are what brewers use to produce the wort which goes into alcohol…mashing is the act of creating and extracting fermentable and non-fermentable sugars and flavour components from grain by steeping it in hot water, and then letting it rest at specific temperature ranges to activate naturally occurring enzymes in the grain that convert starches to sugars. I am guessing it is some form of this barley mash which they used to keep the cake moist and from going mouldy.

Fruitcake has been known to last for as long as 25 years it is the sugar and the alcohol which prevents the cakes from going bad.

Even in my lifetime, I have saved puddings and cakes from one Christmas to another or the top tier of the wedding cake would be saved for the christening of the first child which used to arrive within the first year of the marriage.

It is a custom which is still upheld by the British Royal Family…Prince Louis, the youngest son of the Duke and Duchess of Cambridge when christened one of the refreshments Prince William and the former Kate Middleton served at the private reception following the christening raised a few eyebrows: a slice of their 7-year-old wedding cake.

“Guests will be served slices of christening cake, which is a tier taken from The Duke and Duchess of Cambridge’s wedding cake,” a release from Kensington Palace said.

The two also served their wedding cake at the christenings of their older children Prince George and Princess Charlotte, per a British royal tradition that dictates that couples save tiers of their cake for such occasions.

In Germany fruitcake is called stollen and has powdered sugar on top. Italy has panforte or panettone. Poland and Bulgaria call it keks. In the Caribbean, fruitcakes are made with a lot of rum — the fruit will soak in rum for months before baking—so it’s not a treat for kids! 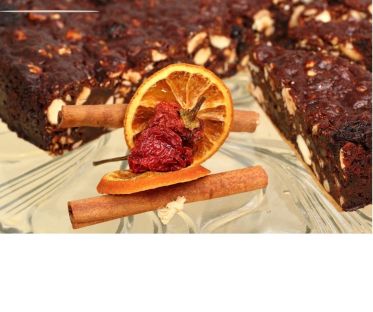 Portugal has the bolo rei — each cake has one fava bean inside and whoever gets the piece with the bean is supposed to buy the cake next year! Vietnam has a fruitcake called Banh bo mut that’s made for the Lunar New Year …

It comes in two versions and uncooked one and a cooked one. The uncooked one is similar to some of the Thai desserts and made with candied fruit, coconut and coconut milk it is like a set jelly type of cake with fruit.

The first icing was made from sugar, egg whites and flavouring…the first boiled icing which was poured over the cake which was returned to the oven when this cooled it became glossy ice-like covering.

It was not until the mid 19th century that cakes as we know them made with extra refined white flour and baking powder instead of the customary yeast. Then in the 20th-century buttercream frosting began to replace the boiled icings.

Ancient bread and cakes were often used in religious ceremonies and purposely made in specific shapes some round or in the shapes of animals depending on what was being observed…for example a 12th Night Cake, Kulich a Russian Easter cake…a simnel cake in the UK…there are many examples of where cakes have a specific meaning and history…

I love a rich fruit cake and it lasts as long as you want it too some people love the traditional Christmas or now some make a square cake and cut it into slices it is just preference and of course once it is made I always just sprinkle a little brandy, whisky, rum or sherry over the cake every couple of weeks an age-old tradition in our house and I am sure many others.

Bring to the boil, then lower the heat and simmer for 5 mins. Tip the fruit mixture into a large bowl and leave to cool for 30 mins.

Tip into your prepared tin, level the top with a spatula and bake in the centre of the oven for 2 hrs.

Remove the cake from the oven, poke holes in it with a skewer and spoon over 2 tbsp of your chosen alcohol. Leave the cake to cool completely in the tin. 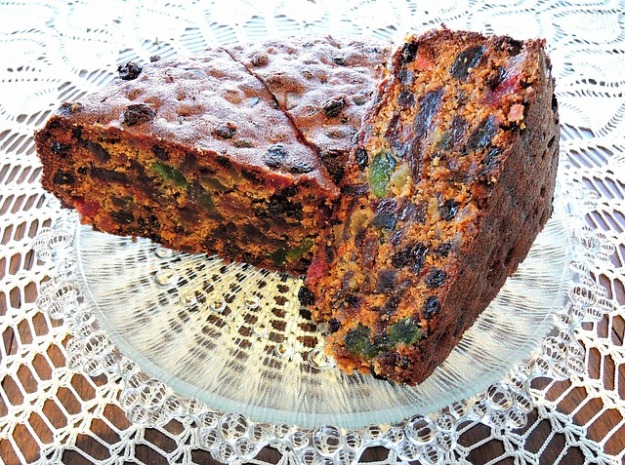 To store, peel off the baking parchment, then wrap well in cling film. Feed the cake with 1-2 tbsp alcohol every fortnight, until you ice it.

Don’t feed the cake for the final week to give the surface a chance to dry before icing.

Because fruits and nuts were expensive it was seen as an honour to be presented with a cake whereas now there are cakes for every occasion…Cakes are much cheaper to make and buy but the message remains constant.

Cake says: you’re important and we love you which is why if you make someone a cake as a Christmas or New Year gift it will mean something very special to the recipient that they are loved…

The environment is also something I am passionate about and there are now regular columns on my blog this year. It is important that we are mindful of the world we live in…We all need to be aware of our home’s carbon footprints…where does our food come from? How far does it travel…Simple to do but if we all did it…Not only would we support local businesses but reduce our carbon footprint…

I would also ask that when you are shopping for presents, food, and decorations that you think about its origin and how it was produced…carbon footprint, child labour…Please think about the packaging can it be recycled or reused…Do you really need it? Every little helps…x