It is a very Orange time of year…not only are Persimmons in season but oranges, satsumas, Papaya and mango are at their best here…

Persimmon  … a lovely fruit with the texture of a crisp apple fairly sweet but very nice. The Thai name for Persimmon is Lūk phlạb, it is also sometimes called the Sharon Fruit.

The persimmon is one of the classical fruits of China, from where it was introduced in ancient times to Japan. Mainly grown in China and Japan commercially but smaller growers have developed in Italy, Israel, Brazil, California (U.S.A.), Australia and New Zealand. In South-East Asia, it is grown on a limited scale in Java, Sumatra, Malaysia and Northern Thailand.

At present grown by hill tribe growers here in Northern Thailand. Production has been slow to cultivate and they are mostly sold as fresh fruit which is probably why by comparison with other fruits they are expensive. 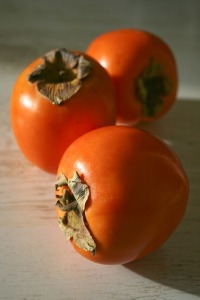 Many of the hill tribes here are growers which operate under the Royal Project which was started to help the hill tribes. The Royal Project was initially established in 1969 by His Majesty King Bhumibol Adulyadej to support farmers in rural areas to plant crops instead of planting opium. Initially, it was a voluntary project cooperated by many famous universities in Thailand such as Kasetsart University, Maejo University, and Chiang-Mai University. Nowadays, the Royal Project has travelled throughout the country covering Chiang-Mai, Chiang Rai, Lamphun, Phayao, and Mae Hong Son.

It is also where I can get my proper Greek Yoghurt and not this greek style yoghurt which the other stores sell.

Persimmons can be eaten fresh, dried or cooked and are commonly used around the world in jellies, drinks, pies, curries and puddings. Which is probably why I have seen an increase in posts on Pinterest for persimmon recipes.

Persimmons are also a good source of thiamine (B1), riboflavin (B2), folate, magnesium and phosphorus.

These colourful fruits are low in calories and loaded with fibre, making them a weight loss-friendly food.

Aside from vitamins and minerals, persimmons contain a wide array of plant compounds, including tannins, flavonoids and carotenoids, which can positively impact your health.

The leaves of the persimmon fruit are also high in vitamin C, tannins and fibre, as well as a common ingredient in therapeutic teas.

Until tomorrow and Saturday Snippets have a lovely day xx

Sporadic randomness from a disheveled mind.