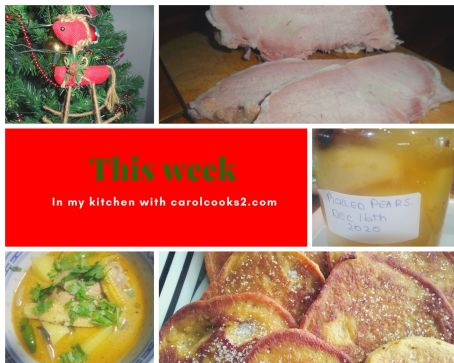 What’s been cooking in my kitchen this week? A lovely chicken massaman curry...one-pot cooking is the way to go, my Christmas ham is brining nicely and if you haven’t started yours its not too late a loin of pork only takes between 5-6 days so you just have time, my Christmas cake has had its final drink of Brandy which means today or tomorrow I will be making Marzipan…As it is National Pear month I have pickled some pears this week there was also quite a lot of the beautiful syrup over…and not one to be wasteful I have popped it in a little jar and will use it as a glaze for when we cook pork.

Put all the ingredients in a pan except for the pears, cook on a low heat stirring until the sugar has dissolved add the peeled and cut pear halves and cook for 15-20 minutes until they are tender.

Pears cooking in the syrup.

Remove the pears from the pan and drain, keep to one side and boil the syrup rapidly until it has reduced by about a 1/3 and is slightly thickened.

Put the pears in warm sterilised jars and add the syrup covering the pears. Seal tightly and leave for about 2 weeks and then enjoy with cheese and or your favourite meat.

N.B. Cooks Notes...I halved the recipe as it was the first time I had pickled pears it made 2 jars of pickles and I had some syrup over…the original recipe used all-spice berries which I didn’t have so I used Juniper berries…

I also made my last bread pudding of the year and added some cranberries to the mix to give it a festive pop it is really lovely those cranberries add that little pop of tartness…The last of my bananas I made into some banana muffins…and some latkes with a tropical twist... they were very nice the recipe came from a dear fellow blogger… Dolly from koolkosherkitchen… 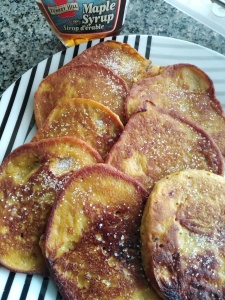 Please pop over to her blog ..say hello she will make you very welcome and have a look at her recipes they are all delicious and easy to follow.

Did you know? “The Night of the Radishes” is one of the annual Christmas customs in Oaxaca, Mexico. On December 23rd, The Night of the Radishes (Noche de Los Rábanos in Spanish) is an annual event in the city of Oaxaca, Mexico, dedicated to the carving of oversized radishes. The event has its origins in the colonial period when radishes were introduced by the Spanish. Oaxaca has a long wood carving tradition and farmers began carving radishes into figures as a way to attract customers’ attention at the Christmas market, which was held in the main square on December 23. In 1897, the city created the formal competition. As the city has grown, the city has had to dedicate land to the growing of the radishes as the event has become very popular attracting over 100 contestants and thousands of visitors. However, since the radishes wilt soon after cutting the works can only be displayed for a number of hours, which has led to very long lines for those wishing to see the works.

Let’s have some music…A tune or two…

This weeks rendition is from  Jonas Kaufmann –

Depending on where you live in the world some of you are going to have a white Christmas…Well, FORGET FROSTED GRASS and snow-covered windowsills, in Australia it’s the Christmas beetle that heralds the start of the festive season. They are so pretty with their metallic coats.

The metallic scarabs are synonymous with summer Down Under – or at least they used to be.

Research, however, suggests that  Australia’s endemic Christmas beetle (Anoplognathus) population is on the decline.

Entomologist Dr Chris Reid, from the Australian Museum, attributes the drop in sightings to drier than usual spring weather, especially along the coast of New South Wales.

Christmas beetles in the greater Sydney region have also been victims of urban sprawl, with species disappearing from the city’s west due to much of their natural habitat being used for development.

I know people have to live in houses but urban sprawl has a lot to answer for and more care and research should be undertaken before permission to develop has been given or provision should be made to keep wildlife disruption to a minimum…Most cannot readjust.

THE  NATURAL habitat for Christmas beetles is woodland, where there are plenty of trees and rich soil. The larvae develop in the soil, and remain there as curl grubs, feeding on grass and plant roots, as well as the surface roots of eucalypts.

As fully grown adults, they mainly eat eucalyptus leaves but are known to consume the foliage of introduced species, such as the peppercorn tree.

BUT the end of spring and start of summer is when the larvae hatch out. The adults aren’t active during the winter months; they are larvae only during those months. When the adults are spotted during the Christmas month they’re at the stage of laying eggs.

This time of year is also mating season.

Image by John Vossen from Pixabay

If you are lucky enough to see them during the day on young eucalypts… they’re usually in clusters trying to mate, with the males pushing each other off the females.

They are very pretty though and Christmassy …Don’t you think?

The information about the Christmas Beetle came from Australia’s National Geographic Magazine.

As you know I love Christmas Carol’s and Christmas Adverts…I have only quite recently started following Clive who is posting a daily Christmas Advent Calendar…which consists of two tracks and a comic strip…While I love Christmas songs like Clive I don’t like listening to overpaid diva’s screaming them out…Clive has introduced me to artists who were mostly previously unknown to me and are well worth a listen…some tracks are quite beautiful…some very funny and some you will only wish to listen to maybe once a year…This one is a Cappella (which) I love…and it’s funny they remind me a little of the Barber Shop Boys.

Stay safe and well, have fun and laugh a lot as laughter is surely the best medicine and its free…xxx