An autumnal and winter spice which is often used in autumn and winter desserts, soups, hot beverages it also pairs well with cheese and cream-based recipes…my abiding memory is rice pudding and that lovely brown skin which formed by my mother grating nutmeg over the top before baking the pudding we used to argue over it…now I get it all as hubby doesn’t like it…he doesn’t know what’s good for him…lol..but I am not arguing the point over this or sharing… 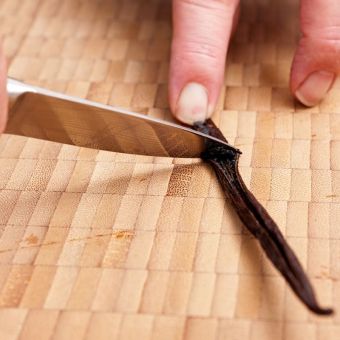 Move the pan off the heat and leave the milk to infuse for 5 minutes. Remove the vanilla pod.

Spread the rice and sugar in the buttered dish. Pour the warmed milk over it and stir thoroughly.

Grate a thick layer of nutmeg to generously cover the top.

Place the dish on a baking sheet and carefully put it in the centre of the preheated oven. Bake the pudding for about 2 hours, until it turns creamy and thick and forms a skin of nutmeg on top.

Let the pudding cool and set for about 15 minutes. Serve the rice pudding on its own or with stewed fruit such as poached pears or roasted rhubarb. You could also add a dollop of homemade jam on top…

The history of nutmeg dates way back to the first century A.D…a treasured spice as it commanded a high price when trading…it even caused wars the Dutch conquested the Banda Islands, which ended in a massacre, to monopolize the nutmeg trade. This resulted in the establishment of the Dutch East India Company, an amalgamation of several Dutch trading companies.

Nutmeg has a long culinary history and can be part of both sweet and savoury dishes. It can be used whole and grated directly into a recipe or measured or shaken from a canister of pre-ground nutmeg. To use the whole nutmeg, you will need a Microplane or nutmeg grater to shave off a small portion of the seed. When including nutmeg, make sure not to use a heavy hand, as this intense spice can easily overpower the flavours of a dish.

Nutmeg is also an ingredient in different spice blends, such as pumpkin pie spice, ras el hanout, and garam masala (mace) which comes from nutmeg is what I use in my Masala Powder.

Garam Masala… I make all my own spices and this is no exception easy to make and it means spices rotate quicker so they are always fresher which one reason why I make my own spice mixes and also it is cost-effective and they contain no fillers and nasties like store-bought mixes.

Some ask the question is it the same as curry powder? The answer no…Curry powder contains many of the same ingredients, for example, fenugreek and cumin along with other spices however garam masala consists entirely of pungent spices and has a stronger flavour.

Dry roast all your spices individually until warm and fragrant. Leave to cool completely and then grind to a fine powder …I have a little coffee grinder which I use to grind my spices and it works really well prior to that I used a pestle and mortar which is hard work but brilliant as an arm toner.

Store in an airtight container and use within 3 months as the spice will start to lose its potency …If you use a lot of garam masala then just double or treble the quantities.

It is also sprinkled over a variety of hot beverages like cappuccino and eggnog for added flavour and garnish.

Nutmeg and Mace…although both spices come from the same tree, nutmeg and mace do differ from each other. The mace is the outer coating of the nutmeg seed, this is removed first and ground into a red-coloured spice, while the nutmeg pit or seed can either be kept whole or ground up. 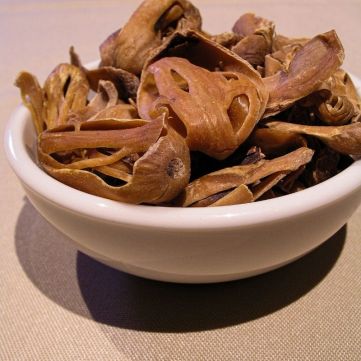 Nutmeg has a milder taste compared to mace and is sweeter and more delicate; mace is a little spicier and can be described as a combination of pepper and cinnamon. Even though they grow as one, they are rarely used together in a recipe.

Also called the aril, this outer layer can be removed, dried, and used as a spice in its own right. Ground mace is sold in powdered form, or you can find it in dried, whole pieces called mace blades.

Nutmeg is a spice found in my kitchen and many kitchens worldwide. Its warm, nutty flavour pairs well with many foods, making it a popular ingredient in sweet and savoury dishes alike. 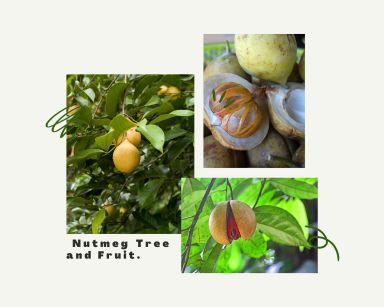 Aside from its many culinary uses, nutmeg contains powerful anti-inflammatory plant compounds that act as antioxidants. These may improve mood, blood sugar control, and heart health, though more research is needed on these effects in humans.

But let’s not forget Mace...a spice in its own right…While mace can be used in sweet dishes similar to nutmeg, this spice really shines in savoury dishes. It’s often used in spice blends for flavouring meat dishes, stews, curries, savoury sauces, homemade pickles, and is a common ingredient in Indian cuisine.

But like its other half the nutmeg it comes with a warning…Mace contains the chemical myristicin which has been linked to hallucinations and other mental side effects. People who have taken larger doses of nutmeg, which also contains myristicin, have experienced nausea, dry mouth, dizziness, irregular heartbeat, agitation, and hallucinations.

Until tomorrow and Saturday Snippets have a lovely day xx

34 thoughts on “Fruity Friday’s…Nutmeg and Mace…”

Liner notes for a decade.