How to make your very own Tahini paste/butter..it is so quick and easy and the cost of a packet of sesame seeds is virtually pennies against the cost of a store-bought jar of tahini and no nasties…. 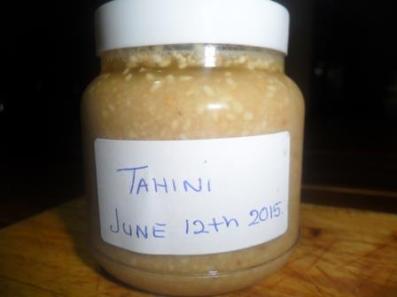 It is such a pretty plant…which apart from producing seeds which are used mainly in desserts in Thailand. Here down on the farm they are dried and used for just that really and to make the lovely sesame biscuits which we love…

The oil from the seeds is not really used in Thai cuisine like it is in Chinese cookery.

The sesame seed is one of the most ancient seeds on earth there have been remains of Sesame seeds found and dated as far back as 3500BC. It was also widely traded in parts of Mesopotamia and the Indian subcontinent around 2000BC.  Always highly valued in Eastern, African and Mediterranean culture it has been used for thousands of years in cooking to flavour foods. Sesame oil has one of the highest oil contents of any seed and a rich nutty flavour. Across the continent’s world-wide sesame oil, tahini and seeds are widely used.

It is a good source of vitamins and minerals that boost nutrient absorption, it is beneficial to human metabolism and the bodies fat-burning ability.

Sesame butter or Tahini is a pretty calorific dense food with 89 calories plus 8 gm of fat per tablespoon BUT the majority of that fat comes from healthy unsaturated fat like Omega 3 oils which help lower inflammation thus lower the risk of heart attacks. However, as always I advise moderation.

You have made your tahini so what else can you use it for?

Lebanese Tarator is a Tahini based tasty and delicious tahini-based sauce perfect to serve with falafel…steamed veggies, kofta’s, with a meze…burgers a tasty versatile dressing.

In a food processor, combine tahini, garlic, lemon juice, and salt together. Blitz, adding the water as you are combining the ingredients. Mix until it forms a smooth sauce. Remove from the processor and scoop into a small bowl. Stir in parsley and sprinkle with some sumac or paprika powder.

Serve immediately, or store in the refrigerator for up to a week in an airtight container.

Some other uses if you want to use up the jar…add some honey and orange juice/zest for a wonderful dressing, deep fry some cauliflower bites and add some more lemon to the sauce…

That’s all for today...another easy to make at home paste…it saves you money and cuts the chemicals and fillers.