For the last two weeks, I have taken inspiration from something I have read or watched… this week thanx to Jim of Bordens Blather and a very interesting bather it was…Thank you for the inspiration, Jim x

My chosen theme…Whiskey or is it Whisky?

Using the incorrect form of the word whiskey is a mistake that will largely pass unnoticed unless you count liquor aficionados among your readers. Then you’ll take some flak because whisky and whiskey might refer to the same kind of spirit, but they shouldn’t be thrown around without care…Ooops

Whiskey Tango Foxtrot…I think most of us have heard of that term…but where did it originate?

The phrase Whiskey Tango Foxtrot comes from the NATO phonetic alphabet, also known as the ICAO (International Civil Aviation Organization), a universal phonetic alphabet that has been used by militaries across the world since the mid-20th century.

In order to account for both background noise and the fact that some letters can sound-alike (M/N, B/P, etc.), the NATO phonetic alphabet substitutes every letter for a distinct word. The word for W is Whiskey, T is Tango, and F is Foxtrot.

Shortened to WTF…which has been used since at least 1985, where it appeared in a Usenet post by Jay Fields. By the end of the 1980s, the military-style Whiskey Tango Foxtrot appeared online as a variation of this euphemism.

It’s unclear if this version originated within the US military, but it was certainly adopted by them somewhere along the line.

Probably because it was a sly way to sneak in a cuss word without censors realizing it, Whiskey Tango Foxtrot made a few notable appearances in pop culture: serving as the title of Ashley Gilbertson’s 2007 Iraq war memoir, a 2011 Scandal episode, and a 2013 NCIS episode.

However, the phrase truly hit the mainstream with the 2016 release of the comedy film Whiskey Tango Foxtrot, starring Tina Fey.

Someone who makes whiskey is called a “Distiller”

The famous Cutty Sark also has a connection to Whisky…

In 1923 British wine and spirit merchant Berry Bros. & Rudd decided to develop a new whisky for American drinkers. They named it after the clipper ship which had just docked in London and had hit headlines all over the world – the Cutty Sark. 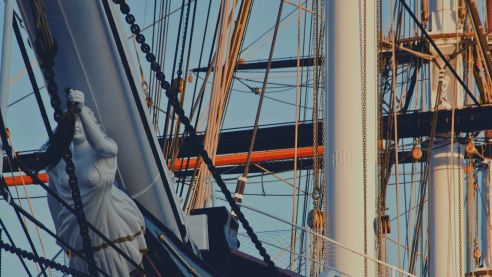 Let’s have some music…

Chocolate Whisky Brownies sound delicious as does a rich whiskey glaze with a blue cheeses cheeseburger …or, it’s apples, it’s crispy with whiskey, what more could you want in a winter dessert? Find the recipe here!

Do you have a favourite recipe that includes whisky you would love to share? Mine is a whiskey Sour…