Welcome to my new A-Z …World Cuisines…where I will be looking at the countries of the world, their food and national dish or their most popular dish around the world…by this I mean some dishes are eaten in many countries as their fame has spread around the world…I have Chel to thank for giving me some ideas from which this one took shape…Thank you Chel x

Today I am looking at the cuisine of  Bulgaria…

Founded in the 7th century, Bulgaria is the oldest state on the European continent…Officially known as the Republic of Bulgaria it occupies the eastern portion of the Balkan Penninsula in Southeastern Europe…

Bulgarian cuisine shares a number of dishes with Middle Eastern cuisine, including popular dishes like moussaka, gyuvetch, kyufte and baklava. White brine cheese called “sirene” (сирене), similar to feta cheese is also a popular ingredient used in salads and a variety of pastries.

A traditional Bulgarian Breakfast is “Banitsa and boza”. Banitsa is traditional Bulgarian food prepared by layering a mixture of whisked eggs and pieces of cheese between filo pastry and then baking it in an oven. Boza is a drink with a thick consistency and low alcohol content, it has a sweet flavour…To me this sounds perfect I love filo pastry and with the cheese and eggs, it sounds like a wonderful breakfast dish I would love to recreate… 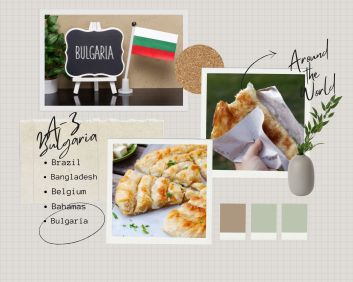 This breakfast dish can be eaten hot or cold and sometimes spinach is added to the Banitsa…Banitsa also comes in sweet versions for desserts.

Bulgarian food is mostly made up of cheese, yoghurt, and vegetables. And while Bulgarian cuisine is quite similar to Greek and Turkish food, it has its own unique take on the dishes. They are customarily fresh and hearty with a variety of mild spices. Commonly used proteins are chicken, lamb, and pork, although seafood and veal are also popular depending on the region.

A popular starter or side dish is Mish-Mash…a word which to me conjures up a variety or mixture of different ingredients and that’s exactly what it is…Mish-mash is a Bulgarian salad made with freshly cut vegetables, eggs, and sirene cheese, a type of Balkan brined cheese similar to feta.

It’s typically made with tomatoes, onions, and peppers though it can be made with other vegetables as well like eggplant, okra, carrots, scallions, and garlic. It’s seasoned simply with black pepper and salt and often garnished with freshly cut parsley. 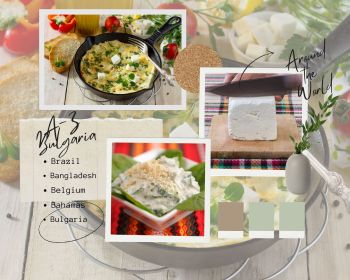 Salads are very popular dishes here and many recipes contain dairy products, cheese, yoghurt…one such salad is Snezhanka which literally translates to “Snow White” of the Disney film fame. It’s a cold salad named as such due to its mostly white colour from its main ingredient: strained yoghurt. Other ingredients include chopped cucumber, garlic, olive oil, salt, and dill. It’s basically a salad version of Greek tzatziki…often walnuts, roasted papers, chopped parsley are added as toppings

It can be served as an appetizer, side dish, or a pitta bread dip. It can also be eaten as part of a meze platter and is traditionally complemented with alcoholic drinks…like Boza which is a naturally fermented drink or Rakia(The) Bulgarian National drink.

Bulgaria does have its own cheese. And while feta cheese is considered one of the most popular, the country also has its very own version. Called sirene, this Bulgarian white cheese is made with cow, sheep, or goat milk—or a mixture of all three—brined and served as a table cheese.

Sirene is a tad softer, wetter, and generally creamier with a grainier texture than feta cheese. But this white cheese is still as crumbly with a slightly citrusy flavour. This traditional Bulgarian cheese is served at almost every Bulgarian meal either in salads, with bread, or in pastries.

Soups both hot and cold are also very popular dishes…Tarator is one such popular cold soup ideal on a hot summer’s day… It’s a cold cucumber soup made with Bulgarian yoghurt, cucumbers, walnuts, oil, garlic, and dill.

Another traditional hot soup is “Bob Chorba”…pronounced “bop” which means beans this centuries-old Bulgarian recipe for bean soup has been a staple in the country partly due to the high volume of bean production. This Bulgarian dish has many variations, with the “Monastery” or vegetarian version being the most popular.

Supa topcheta is a type of meatball soup. There are probably as many recipes for this comforting Bulgarian dish as there are Bulgarian cooks, but there are always three constants – vegetables (typically carrots, onions, and celery), meatballs made with ground meat (usually a combination of pork and beef), and a thickening agent consisting of yoghurt and egg yolks…dairy products play a huge role in Bulgarian cuisine as you have probably noticed…

Of course, we can’t leave out the popular Sarmi which is a delicious traditional Bulgarian dish made of rolled cabbage or vine leaves stuffed with a mixture of minced meat, rice, and various spices then poached in water or tomato sauce. It’s a popular dish often served on Christmas Eve, and usually with a side of yoghurt…Yoghurt is a very popular ingredient in Bulgarian Cuisine…You will also find that raw garlic is served with many dishes and you find it on many restaurant tables alongside the condiments.

If you love trying sausages on your travels then Bulgarian has its own version of salami sausage called lukanka…a type of salami unique to Bulgaria …a flattened cured sausage made with a mixture of pork and veal seasoned with cumin, salt, and black pepper…it is served thinly sliced.

These are all served with freshly baked bread, french fries, salad and of course cheese…as you can see dairy features in nearly every meal… many dishes are thickened with yoghurt or topped with yoghurt.

Desserts come in the form of a sweet Banitsa with a pumpkin and spices filling served with of course yoghurt or pancakes/crepes called Palachinka which are filled with fruit slices, jams, butter, cheese and topped with powdered sugar…Homemade chocolate sweets are also a popular dessert as is ice cream.

The National Drink of Bulgaria is Rakia and it is rooted in Bulgarian history a hard liquor from the brandy family it is made from fermented grapes, plums or virtually any fruit with natural sugars which means that the alcohol content does vary from 40% in commercially sold liquor to upwards of 70%-80% proof from home produced Rakia…just one tipple of that could blow your brains…pure firewater methinks…