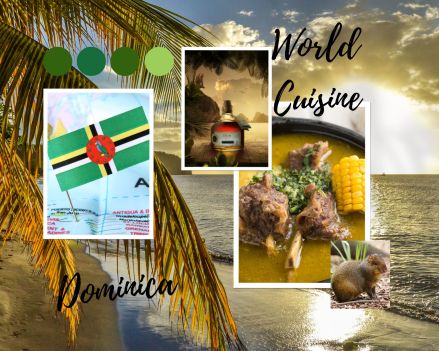 Welcome to my new A-Z …World Cuisines…where I will be looking at the countries of the world, their food and national dish or their most popular dish around the world…by this I mean some dishes are eaten in many countries as their fame has spread around the world…I have Chel to thank for giving me some ideas from which this one took shape…Thank you Chel x

Dominica is an island country of the Lesser Antilles in the eastern Caribbean Sea. It lies between the French islands of Guadeloupe and Marie-Galante to the north and Martinique to the south.

The national dish was Mountain Chicken until the population of frogs (the main ingredient of the dish) rapidly declined around the year 2000 because of a fungus that decimated the frog population. This endangered frog species…a large ditch frog locally known as mountain chicken. If making this recipe then use farm-raised frog legs and if you are in Dominica and offered this dish made with this endangered species then I would not eat it…The recipe can be found here…

Callaloo is now the National dish of Dominica…made with local green leafy vegetable, Callaloo spinach has a very mild flavour that is similar to regular spinach. This spinach is served cooked with onion, garlic, tomatoes, thyme and Scotch bonnet pepper. A perfect side dish for a tropical breakfast, lunch or dinner. 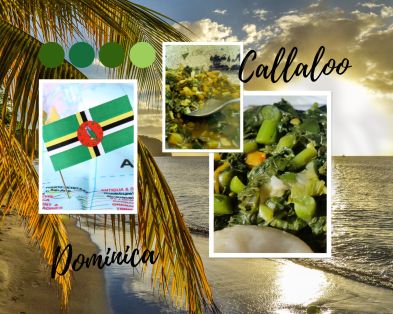 Popular eats have filtered through these islands such as hibiscus tea, macaroni cheese and bakes like Barbadian elephant ears which is a spicy dough that is deep fried and delicious…a type of doughnut…fried bread dough with cinnamon and sugar…

Like many tropical countries, lunch is considered the main meal of the day…then it’s siesta time(time for a nap)…

In local eateries a menu board may simply say ‘fish lunch’ or ‘chicken lunch’ and typically it will consist of the main ingredient, such as fish or chicken, with a fairly standard selection of rice, red beans and boiled “ground provisions.”

This term refers to any one or a collection of root crops such as varieties of yam, like eddoe…eddoes are popular in Spain, Portugal, Brazil and tropical countries. They can be boiled, roasted, fried or added to homemade bread and puddings. Most times, these vegetables are used as an alternative to yams and sweet potatoes. Their flesh is white, orange, yellow or pink.  The term is occasionally stretched to include breadfruit, plantain, and green bananas (rather confusingly known as figs)… 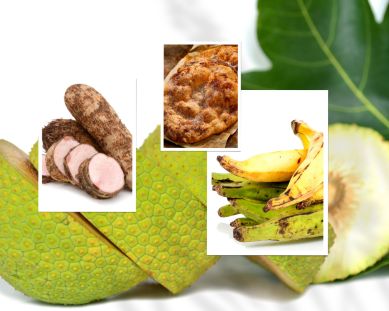 In the Caribbean, the rum shop is often the centre of community life – the focal point where basics can be bought and men play dominoes, during and after which a shot of rum is had.

Of course, there’s rum and there’s rum. On a small island like Dominica, locally-made brands like Macoucherie (the only one made with local cane) are one of the best examples… Cheap as bottled rum is though, in terms of volume Cask rum predominates the Dominican market.

As an island bursting with lovely fresh produce I love how this is at the heart of Dominica cuisine… MY KIND OF FOOD…I love that one of the oldest and most basic is the one-pot dish or braf. One-pot cooking simply means placing all the ingredients you have, whatever they may be, in one large pot, cooking them up in water and seasoning to create a nutritious broth…dishes with names like goat water, which is a goat meat stew, and chatou water, a soup made with octopus.

Sancocheis another traditional dish made from coconut milk, provisions…I love how all the beautiful greens and varieties of yams are called quite simply “provisions plus codfish make this beautiful dish.

Codfish is also an ingredient of Ackrais a kind of seasoned and fried fritter whose ingredients include breadfruit, tannia and, from September to November, in the days after the moon’s last quarter, titiwi, which is a juvenile goby caught in fine nets at the mouths of rivers.

If you are vegetarian you will have no problem finding many delicious dishes to eat…the choice is varied. Tannia ackra, rice and peas, fried plantain, breadfruit puffs, provisions, vegetable sancoche and macaroni cheese are all staple foods and very common dishes.

You may also come across the term ital. This is a term commonly used by Rastafarians to mean wholesome, natural food. It is always vegetarian.